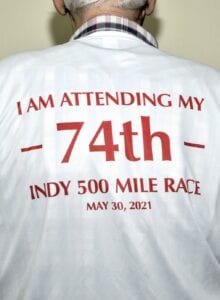 Bill Kearns of Flora marks his 74th Indy 500 Race with this specially made T-shirt which he wore for the occasion on Sunday. Comet photos

The 2021 Indianapolis 500 will be one to remember for Bill Kearns of Flora. Not only did Helio Castroneves win his fourth race, the first time that’s happened in 30 years, but Kearns was attending his 74th race.

At age 10 in 1947, Kearns attended his first Indy 500 Race. He accompanied his dad, Bob Kearns; grandfather, William “Bill” Kearns; first cousin, Dick Wilson; and uncle, Jim Thomson. Their seats were in the back stretch bleachers.

The next year they had the opportunity to secure official badges to get into the bleachers south of the famous wooden Pagoda, behind the pits. They used the badges for a few years and then in 1951 started ordering tickets in different grandstands. But in 1965 his dad had a lung removed and because he could not walk far, they purchased parking on Georgetown Road, the street on the west side of the Motor Speedway. Their seats were just east across the street in the Paddock, where they have been ever since.

Kearns has only missed one race and that was in 1959, the year he graduated from Purdue University with a degree in agricultural economics. He “blames” his wife, Jane, and mother, Bright, for that miss.

According to Bill, someone in the Kearns family has attended every Indy 500 Race since the first one in 1911.

Kearns’ dad started attending Indy 500 races in 1913 and attended 63 straight races before his death in 1981. Bill has long since passed his dad’s record, but like his dad, he is passing his love of the Indy 500 to new generations of the Kearns family. Son, Mike, has seen 40 races; son-in-law, Doug Spruill has been to 20; daughter, Lisa Spruill, 15; and grandson, Tyler Spruill, started going to the 500 at age 10 and has seen 15 races.

Jane, who is not really a race fan, contributes to the family’s passion by sending along her famous race day cookies. Kearns says a key to a great race day is good food and organization and Jane’s cookies are a must! 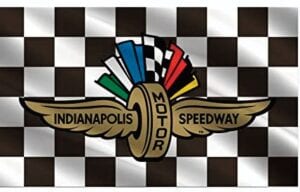 Kearns has every intention of attending his 75th race in 2022. He said he gets excited for each new Indy 500, just like when he was a kid.