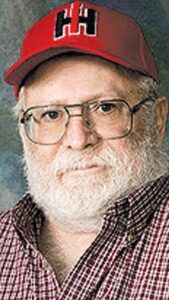 For the last three years he has resided at St. Elizabeth Healthcare Assisted Living in Delphi, Ind. Prior to that, he was a lifelong resident of Camden and its community, serving as a farmer on the family homestead. He was also a production worker at Indiana Packers Corporation in Delphi, beginning on their opening day and retiring after 25 years of service.

Don’s love for farming was his driving force. His ups and downs were most challenging and problems were often solved by his good friends, Galen Snoeberger, Bill Appleton and Doc Stauffer. His hobbies included tractor pulling, collecting toy tractors and coin collecting, often stopping by to visit Gerald and Levi Fielding on almost a weekly basis.

You would often hear Don read aloud his weekly Farm World paper to his family at random times and places throughout the house. The man loved to read anything he could get his hands on, but his favorite reading material was farming, tractor, train and coin collecting magazines.

His community service included being a Carroll County 4-H board member, a past president, and a member of the swine committee for decades, including signing the loan for the new hog building. He was also an active member of the Camden Lions Club, which his father Dean Wingard McCain, was a charter member. His favorite Lions Club committee was serving and pulling his antique tractors in the annual tractor pull. He was a proud 52-year member of the Mt. Zion Masonic Lodge #211 in Camden. He was also a lifelong member of St. Peter’s Lutheran Church, where he served in many capacities.

Don was a 1966 graduate of Delphi Community High School and graduated in 1973 from the Purdue University short course in Agriculture.

His love for his granddaughter, Madilynn, was so pure and he enjoyed the enthusiasm she and her parents had for their Charolais cattle herd.

Don is survived by his wife, Barbara Jo, along with a son, Kyle McCain (Robyn); a daughter, Audrey McCain (fiancé Stephen Meriwether); and a granddaughter, Madilynn Mae McCain. Also surviving are a sister, Marilyn Nance; a brother, Joe McCain (Paula), and sisters-in-law and brother-in-law, Jane Ann Dimitt and Pat and Beth George; several nieces, nephews, great-nieces, greatnephews and many, many cousins.

His parents preceded him in death.

In lieu of flowers, please consider making a donation in Don’s memory to The Carroll County Community Foundation for the Camden-Jackson Township Public Library or to St. Peter’s Lutheran Church.

Cree Funeral Home, Camden, is assisting the family with the funeral arrangements. Online condolences may be left at www.creefuneralhome.com.